Recently, news articles have been suggesting that the earliest archeological finding of human inhabitants in all the Americas is at at Toca da Bastiana rockshelter at Serra da Capivara National Park, Piaui, Brazil. At this sandstone overhang shelter, rock paintings of red ochre symbolizing humans, animals, and designs were found.

These “cave-paintings” were found under a 2 mm thick layer of the mineral calcite, suggesting the antiquity of the paintings. Calcite is formed when water deposits calcium-rich minerals on a rock surface over time, which builds up gradually with successive wettings and dryings of the rock surface. Very similar to how stalactites and stalagmites form in caves. When the calcite crystals first form out of aqueous solution, their radioactive decay first begins, and so they keep the radio-carbon “signature” of the time of their formation.

Watanabe et al. (2003) decided to radio-carbon date the calcite layer, since they supposed…

The Edward’s Plateau encompasses the hill country ecoregion of Central Texas. The Balcones escarpment, forming a semicircle from southwest to northeast surrounding central Texas, forms the Edward’s plateau to the west, which ends to the west and north with more uplifted terrain. The limestone bedrock of this plateau was formed in the Cretaceous by shallow sea deposits. The plateau uplifted in the Miocene while the Gulf Coast region to the east subsided. Subsequent erosion formed the karst topography characteristic of the area today, with abundant hills, creeks, springs, and caves. The Edward’s aquifer roughly follows the western border of the Balcones escarpment and several other aquifers are found in the plateau. 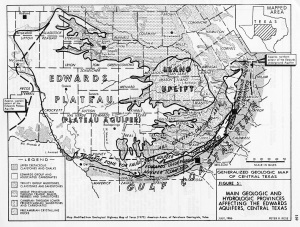 aquifers of the Edwards plateau and Balcones escarpment 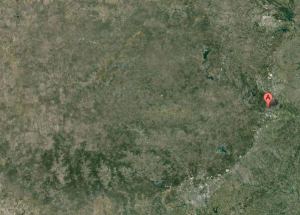 google map of the hill country. “A” indicates Austin

Peoples of the Gulf Coast