California blackberry (Rubus ursinus) is well-known as a delicious and abundant fruit. The Indians ate it straight off the vine and sometimes dried it for the winter.

But did you know an infusion of its roots are effective at stopping diarrhea? The Little Lake Indians of Mendocino County were known to use its roots in this manner. Diarrhea can quickly kill one via dehydration, so in any survival situation, this would be a great herbal medicine to remember!

The spines of the young leaves are soft, and these young leaves are edible, although they have a quite astringent taste. They’re best brewed into a mild tea.
The fibers of the stems make pretty good cordage. When you soak them in water and lightly pound them to separate the longitudinal fibers, the spines will come off.
Another use for the fruits is as a dye.
Himalayan blackberry (Rubus armeniacus) is a common invasive species in California. It’s distinguished by R. ursinus by having larger, thicker spines that are more distantly spaced on the stems.

Fiddleheads on a ridge in Dark Canyon, Eldorado National Forest 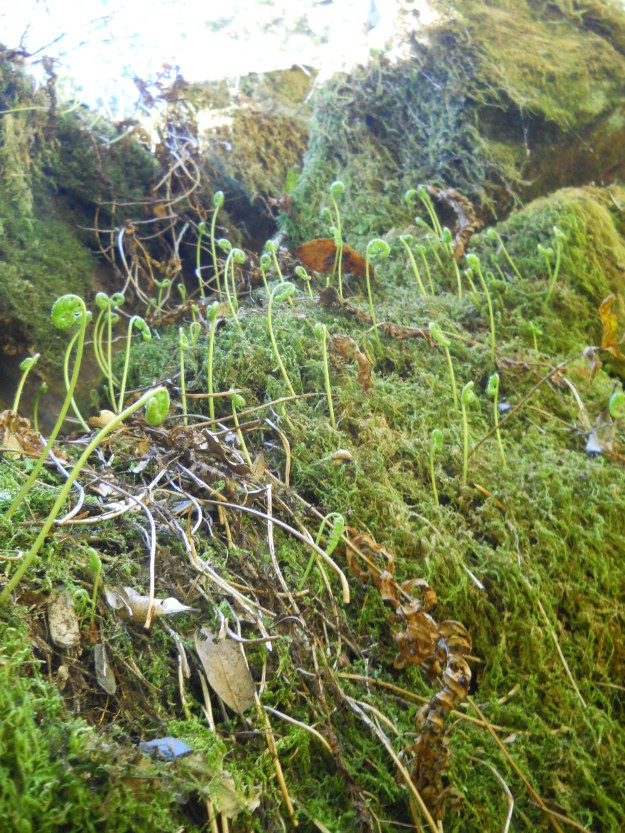 The fiddleheads of most (if not all) species of ferns are edible. The fiddlehead refers to the unfurling young fronds that appear in late winter through spring, appearing singly for new plants, or at the base or middle of full-grown ferns. They can be eaten raw, but are better after being lightly fried.

The species pictured below, Polystichum munitum (Kaulf.) C. Presl, aka western sword fern, is very common in the east bay hills. Also pictured below are its fiddleheads that I fried and ate this spring. 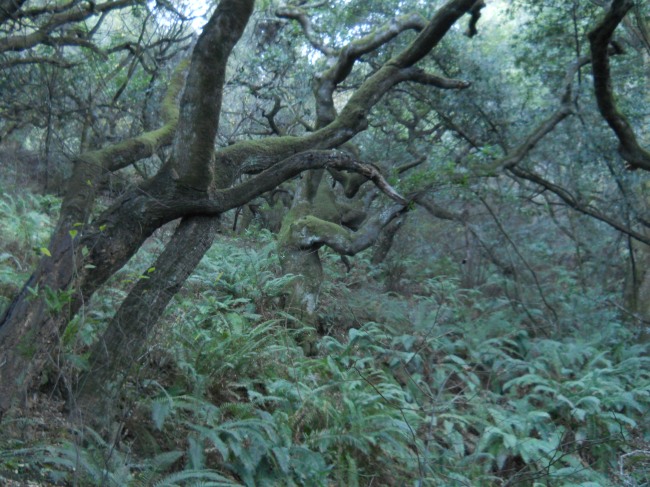 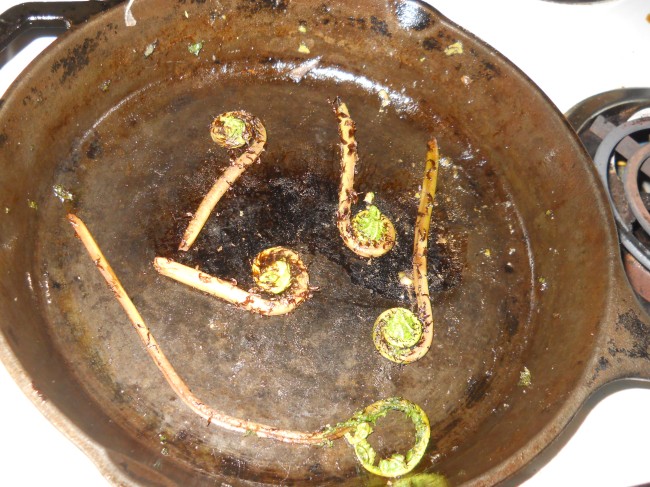 It is somewhat asparagus-like in flavor and texture. It makes a great side dish or could be an important survival food if lost in a fern-rich area.

Fronds of Polystichum munitum were also used by the Kashaya Pomo Indians of California to line earth pit ovens for slow-cooking many types of foods, as well as to line basins formed in sand for leaching acorn or buckeye meal (Goodrich et al. 1980).

Other fern species and uses:

The juice of fiddleheads of Pteridium aquilinum (L.) Kuhn, aka Western (or common) brackenfern were used by the Kashaya Pomo as a body deodorant (Goodrich et al. 1980).

The root of P. aquilinum was a staple food of California Indians of the Sierras (Chesnut 1902). The fronds of this species were used for beating down grass fires, and lining berry baskets for long distance travel (Chesnut 1902).

Hard wood from roots of P. aquilinum were easily split into flat bands for use in basketry (Chesnut 1902). Gathered from summer til fall, the root was lightly pounded to remove the bark, then the dark core was split into layers (Goodrich et al. 1980). Such bands were chewed to remove the greenish fibers, leaving the remaining black fibers, or buried in mud for a week to turn them black (Chesnut 1902).

Equisetum spp., aka horsetail (equus + setum = horsetail in latin) is a common fern on streambanks and other wet freshwater areas. Species in this genus have many uses. The hard outer “skin” can be peeled off, revealing a watery flesh with a nice taste. Though not quite substantial for easing hunger, it provides many vitamins and minerals. Horsetails are rich in silicates (which make them rough to the touch) and accumulate metals in their tissues. While this makes them risky to gather to eat from areas polluted with metals, it also makes them high in iron; a crucial vitamin.

The silicate-rich “skin” of horsetails were used like sandpaper for finishing wood such as on arrows (Goodrich et al. 1980). They were also used to polish wampum, the shell discs strung on strings used for money by American Indians (Chesnut 1902). The name “scouring rush” was given to this genus by American settlers since it was so useful for scrubbing metal pots and pans (rush meaning a grass-like plant growing near water).

Adiantum jordanii Mueller (=A. emarginatum Hook.), aka California maidenhair fern, is a beautiful fern growing on seeps, wet streambanks, and other wet areas. Its smooth, jet-black and mahogany leaf stems were used for keeping earlobe holes open and increasing their size (Chesnut 1902, Goodrich et al. 1980). Stems were split lengthwise, dried, and used as a material for basket design by the Kashaya Pomo (Goodrich et al. 1980). The stems are perfectly divided to be half black on one side and half mahogany on the other, which, along with their polished appearance, gives them a notable beauty (see pics below of whole maidenhair plant and its stem): 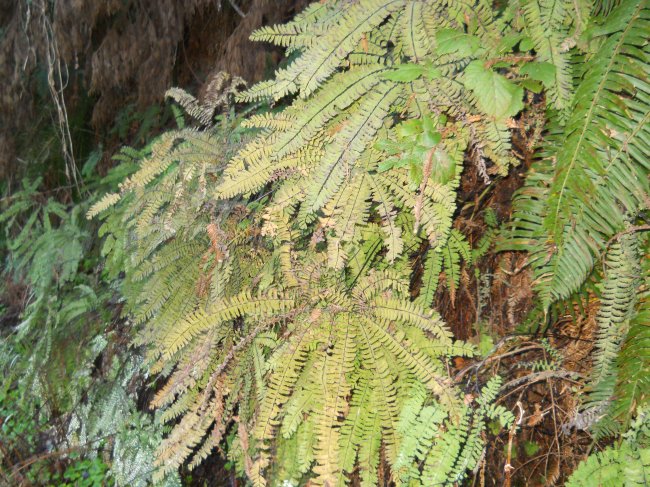 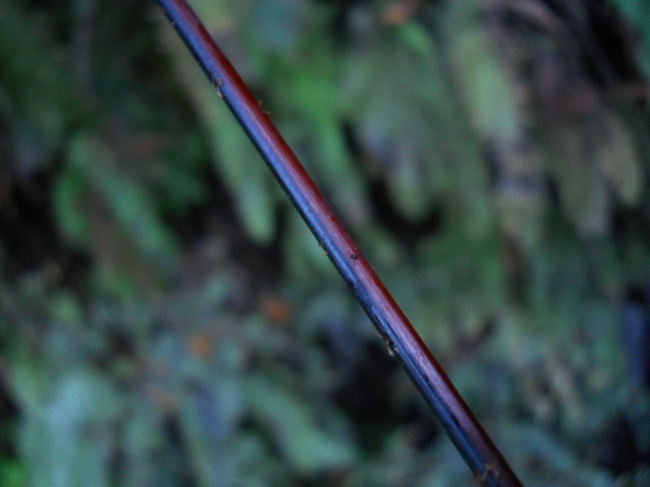 ‘Tis the season… for respiratory illnesses.
But don’t take antibiotics! In the long run they will weaken both your and your environment’s immune systems. There are about ten times more bacterial cells in your body than your own cells. You want to kill them all off with antibiotics and leave their habitat empty for takeover?! No; instead, take medicinal herbs, especially in hot teas, and eat healthily – lots of juices, fruits and veggies, and hot clear soups.

The following are herbs that the California Indians used to combat colds / flu / sore throats / bronchitis / fevers. They are all native to the California Bay Area, extending through Central and Northern California, but many of the same species or their relatives can be found across the US, both wild and in herb stores. I’ve tried to list them roughly in order of importance and availability.

Peoples of the Gulf Coast